Smoking Cessation For the Busy Clinician for Technicians 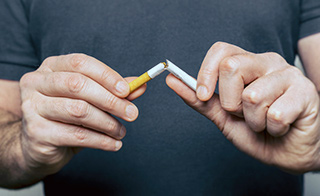 More than 50 years after the landmark 1964 Surgeon General’s Report on the health consequences of smoking, an estimated 15% of adult Americans still smoke. Smoking remains the leading cause of preventable death in the United States – accounting for 480,000 deaths per year (1 of every 5). People who quit smoking greatly reduce their risk for tobacco-related diseases, including cancer, heart disease, and lung disease, while also increasing life expectancy and improving quality of life. Each year, the economic costs due to tobacco use, including direct medical care and lost productivity, exceed $289 billion. For each pack of cigarettes sold, the societal costs due to smoking-related health care costs and lost productivity are estimated at $19.16 per pack, nearly 3 times the average cost of a pack of cigarettes ($6.16).

The good news is that 68% of all adults who smoke want to quit. Effective treatments are available—medications, behavioral counseling, or both—with successful quit rates of around 20-37% at least 6 months after quitting. However, most patients attempt to quit unassisted (without using proven cessation treatments). During 2015 only about one third of smokers used behavioral counseling and/or medications to assist them when trying to quit.

Over the past several years, research has guided our clinical approach to treating tobacco use and dependence. When used correctly, the FDA-approved medications for smoking cessation approximately double the likelihood of quitting. Further benefit is seen when medications are combined with behavioral counseling. Although more intensive interventions provide higher quit rates, even brief advice from healthcare providers—as few as 3 minutes—has been shown to have an impact on patients’ likelihood of quitting...