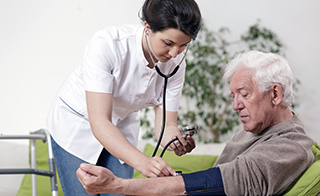 This CE activity was originally published in The Rx Consultant.  If you received credit for it previously, you cannot receive credit for it again.
This issue will bring you up to date on the recent guidelines for the management of hypertension in adults.

Hypertension is a leading cause of cardiovascular disease, stroke, heart failure, and kidney disease. According to a recent update from the CDC National Center for Health Statistics, nearly 30% of adults in the US have hypertension. The rate of hypertension is similar among women (28%) and men (30%). It is more common among US non-hispanic black adults than any other ethnicity. Within age groups, the incidence ranges from 7.5% among adults 18-39 years old to 63% in those age 60 and older. Of concern is that hypertension control has not been improving. In 2015-2016, only 48% of adults with hypertension had achieved control which, at the time, was considered blood pressure less than 140/90 mmHg.

Recently, the American College of Cardiology (ACC) and the American Heart Association (AHA) released an updated guideline for the prevention, detection, evaluation and management of hypertension.2 The 2017 ACC/AHA guideline was developed and approved in collaboration with 9 other professional groups, including the American Pharmacists Association (APhA). A multidisciplinary, team-based approach to hypertension management is strongly recommended (including the patient, primary provider, and other professionals such as cardiologists, nurses, physician assistants, pharmacists, and dietitians)...

To receive CE credit, the participant must read the monograph in its entirety, complete the online post-test and receive a score of 70% or greater, and complete the online evaluation.
Pharmacists and Nurse Practitioners
Be sure your profile has been updated with your NAPB e-profile # and birth date information BEFORE completing the online evaluation, or your credits cannot be reported to CPE Monitor.
Continuing pharmacy education credit is automatically reported to CPE Monitor once the post-test & evaluation are successfully completed.