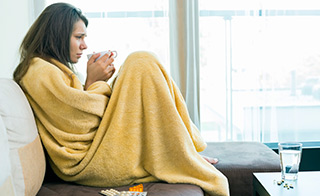 This issue provides key information on influenza vaccines and antiviral medications for the 2018-2019 flu season, including precautions, side effects, and use in special populations.

Influenza (commonly referred to as “the flu”) is a contagious viral infection of the respiratory tract (eg, nose, throat, and lungs). Influenza viruses are primarily spread by respiratory transmission – through droplets from coughing or sneezing. The circulation of influenza viruses varies geographically, with transmission occurring between October and May in the Northern Hemisphere of the temperate region (which includes the US), April and September in the Southern Hemisphere of the temperate region, and year-round in tropical/sub-tropical regions. In the US, peak influenza activity often occurs in January and February.

The flu can affect people of all ages, most frequently schoolaged children, usually causing asymptomatic infection or mild to moderate illness. Severe illness and death occur most often in vulnerable populations (eg, infants, elderly, and immunocompromised individuals). Each year, influenza affects 5-20% of the US population and causes 3,000-49,000 deaths from influenza-related complications. In the 2016-2017 season, 31 million Americans were infected, 14.5 million sought medical care, and 600,000 individuals were hospitalized due to influenza.

Influenza vaccination is an important primary prevention strategy. The Centers for Disease Control and Prevention’s (CDC) Advisory Committee on Immunization Practices (ACIP) recommends routine vaccination for all persons 6 months and older (unless contraindicated) starting in early fall, as soon as the

vaccine becomes available. The vaccine is available in a variety of formulations; however, the ACIP makes no preferential recommendation and encourages vaccination with any licensed, age-appropriate vaccine during the 2018-2019 season. Despite the ACIP’s universal recommendation for influenza vaccination, only 47% of the target population in the US (individuals 6 months and older) received the vaccine during the 2016-2017 season.

To receive CE credit, the participant must read the monograph in its entirety, complete the online post-test and receive a score of 70% or greater, and complete the online evaluation.
Pharmacists and Nurse Practitioners
Be sure your profile has been updated with your NAPB e-profile # and birth date information BEFORE completing the online evaluation, or your credits cannot be reported to CPE Monitor.
Continuing pharmacy education credit is automatically reported to CPE Monitor once the post-test & evaluation are successfully completed.