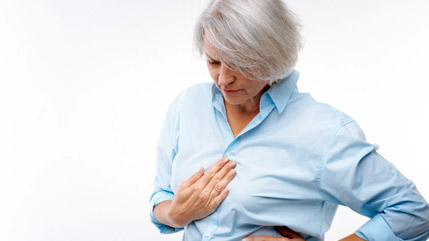 Heartburn is a burning sensation in the chest that may radiate toward the neck, throat, and occasionally, the back. It most often results from the reflux of gastric contents into the esophagus. Heartburn is among the most common gastrointestinal complaints, and is a common reason people seek medical care. The worldwide prevalence of reflux symptoms that occur at least once a week is estimated to be 13%, but varies widely among countries. In the US, the prevalence ranges from 6% to 30%. It is higher among individuals who are 50 years or older, those who are smokers, nonsteroidal antiinflammatory drug (NSAID) and/or aspirin users, and obese individuals.

Heartburn and regurgitation are the typical symptoms of gastroesophageal reflux disease (GERD). GERD is defined as the effortless movement of stomach contents into the esophagus or mouth, which leads to troublesome symptoms and/or complications. 5 Heartburn is a symptom – GERD is a disease. Heartburn is differentiated from GERD based on symptom frequency and severity, and the impact of symptoms on quality of life. Reduced quality of life is linked with frequent symptoms – especially nocturnal symptoms, which can lead to sleep disturbances that impair next-day functioning.

Men and women are equally affected by GERD, but men are at greater risk of developing complications – mainly erosive esophagitis, Barrett’s esophagus, and esophageal cancer. GERD should be managed by a health care provider, as patients may need long-term therapy and ongoing monitoring for complications. In contrast, heartburn can often be managed with appropriate self-care including lifestyle changes and over-the-counter (OTC) medications...