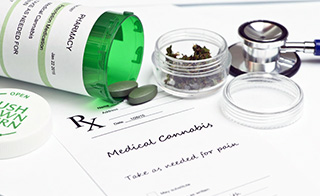 Marijuana has been used for thousands of years for medical conditions, as well as for recreational purposes. The terms “marijuana” and “cannabis” are used interchangeably; however, cannabis is the more contemporary clinical designation. The use of marijuana has increased recently among US adults (18 years and older), from 10% in 2002 to 13% in 2014. The rise in marijuana use coincides with a declining perception of risk linked with its use, and its use is more prevalent in states with permissive medical marijuana laws. As of November 2016, 28 states and the District of Columbia have legalized medical marijuana, and 16 states have laws permitting the use of cannabidiol (CBD; a nonpsychoactive constituent of cannabis) for medical purposes. Seven states (Alaska, California, Colorado, Massachusetts, Nevada, Oregon, and Washington) and the District of Columbia have legalized both medical and recreational cannabis use.

In 2014, over 110,000 people in Colorado (2% of the population) were registered as medical marijuana users for conditions such as cancer, pain, glaucoma, or cachexia.2 As many as 2.6 million people are registered medical marijuana users nationwide. The legalization of medical marijuana in many states has occurred despite the fact that the FDA has yet to approve plant-based marijuana for any medical condition. The FDA has approved 2 synthetic cannabinoids, dronabinol (synthetic THC) and nabilone, for management of nausea and vomiting associated with cancer chemotherapy. Dronabinol is also approved for appetite stimulation in patients with wasting due to acquired immune deficiency syndrome (AIDS)...

This CE activity is a monograph (PDF file).